He Heard Me The First Time 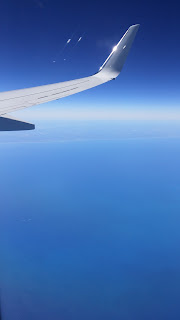 Having just returned from a mission trip with a team to Nicaragua I have many things to write about from the experience. But I'll save that for later. There's no better place to begin a story than at the beginning of the story so this is what I will do.

I have not flown in a very long time and I have grown into certain fears over the years, including the fear of heights. I used to love flying, especially helicopters having flown many times while in law enforcement as well as small planes. But as I said, I have grown into certain fears and this was playing somewhat on my mind as the time approached. Approached it did, and there I was sitting on the plane waiting for the moment when we would roll down the runway and lift up toward the wild blue yonders. Didn't have to wait long.

I began praying before we even started rolling and when we finally lifted up, I just kept on praying and praying and praying. No matter how high we were getting I just kept praying the same prayer asking for protection. It didn't take long before I realized this and thought to myself that at this rate I would call out to God and ask for his protection somewhere in the count of a billion before we landed. It finally came to me that the Lord was probably holding his hands over his ears saying to one of the angels, "I knew I shouldn't had allowed that boy to fly."

I thought how silly I was being, after all do I not trust God, and if I do trust God, why would I keep praying the same prayer over and over as if He did not hear me the first time. So I took in a good deep breath and prayed one more time, though this time I started by asking for forgiveness. I then said to my Lord, "Lord, I know you heard me all the way up here, I'm not worried about it no more, you have it." And that was it, no more worries, no more praying, no more doubting, no more fear.

I often picture Jesus and Jairus standing side-by-
side as the crowd came up to Jairus and said those horrifying words, "No need to bother the teacher anymore, your daughter is dead." I see Jesus laying his hand on Jairus' shoulder and with that reassuring hand of God in the flesh upon his shoulder, Jairus hears those amazing words of instructions and love, "Do not fear, only believe."

Somewhere around 37,000 feet above the earth, I felt the hand of Christ upon my shoulder, and yes, I believe.