What Difference Did We Make? 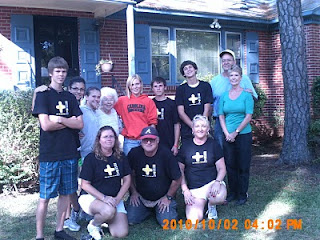 (Picture: Members of Roseboro United Methodist MYF who participated in the Co+Mission project in Rocky Mount earlier this year)


Another year has arrived in our midst and another has resigned itself to the book shelf of time. We can go to most any store and see on the book rack's countless magazines highlighting those moments of 2010 which stood out in the minds of the world such as the Haiti Earthquake, the Gulf Oil Spill, the 2010 Winter Olympics, the Iceland Volcano which caused major disruption in air travel due to the heavy amount of ash released, and so many more.

If you watched the news tonight and heard one reporter ask an 'expert', "Which of the major news stories of 2010 made the most difference in our world?", what do you think the answer would be?

If someone came up to you tonight and ask you, "What have you done this year that has made a positive difference in the lives of those around you?", what would your answer be?

If someone came up to you and ask, "What difference did your church make in our community in 2010?", what would your answer be?