My Cross Carried Me 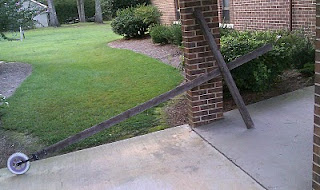 I haven't walked with my cross in a while and felt the overwhelming pull to do so today. I have learned from experience and by my faith that I am not to resist this pull of the Spirit. So I grabbed my cross and off I went to see what God had planned for the cross and me. It didn't take long to find it.
I had been stopped by a town commissioner by the park and was talking when a SUV stopped beside us. It was a family from Gardner who were on their way to their beach home. They told me that they had seen me walking and wanted to stop and share how much it meant to them to see me expressing my faith in such a powerful way and ask if they could take a picture of me and the cross. No problem, I haven't been asked for a picture before and neither had the cross. We said our goodbyes and shared in blessings for one another and off for the next encounter I went. Once again, I didn't get far before I met another 'once stranger, but no longer.'
I was walking beside Hwy 24 near Hardee's when I heard someone yelling. Looking down a side street I saw a young African American fellow who was running towards me. We greeted one another and he began walking with me. This hasn't happened before and to be honest with you, I felt uneasy. We talked as we walked but I couldn't get the worry thoughts out of my head, so I walked to the edge of town and turned around and walked back the way I came sticking to the main highway. I felt bad I couldn't remove the "spider-sense" feelings I had and prayed continously as we walked for the Lord to show me that I wasn't disrespecting His mission for me.
Was this a test that God had placed in my path? Was this a set up of some sort? Shame on me, I know. But I couldn't stop myself. I'm still praying for the Lord to share with me and I ask you, the reader, to pray for me also.
But soon I was stopped beside the highway by an old friend who I haven't seen in a few years and my walk partner soon bored with my new conversation left my old friend and me. But my walk wasn't over and I still had a way to go before I reached the comfort of home.
As I continued my walk towards home, I was approaching a convient store and noticed a young clean cut Hispanic man standing by the entrance to the parking lot as if he was waiting on me. There it went again. The 'spider-sense' kicked in and I wondered what I had gotten myself into with my walk today. Did I read God's signal wrong this time? Had it been me that wanted this walk and not God afterall? Had I failed the first test and this was a second chance? Lord, what do you want me to do?
This young man was military. He and his friend who was waiting by their truck told me that their best friend had been killed recently in a motorcycle accident on Hwy 24 close to Fayetteville shortly after returning from deployment. He asked me to keep his friends family and him in my prayers and he asked could we get our pictures taken together.
Go ahead, I know you want to. Just say it and get it over with! Shame on me, right? Yelp, shame on me.
I left them and continued on my way and shortly a pickup went by me with the horn blowing and people yelling. I couldn't tell if they were disrespecting me or greeting me. I've had both done before. Soon I would say "Shame on me again."
I was almost ready to turn onto my street off 24 by the drug store when I saw that pickup turn into the parking lot and a little girl around 9 or 10 years old came running up to me. She said, "Sir, my daddy wanted me to ask if you would pray for him." Her dad got out of the truck along with who I presumed was his wife and a couple more kids and he was just a crying.
He told me that he and his wife had made sure that his kids knew the Lord and that his daughter, the one who had approached me, had given her life to God when she was only seven years old. But for whatever reason, he had fallen away from God, but knew this day that he needed God. We wrapped our arms around one another and I prayed with this man and if any of you are reading this knows me, you know I began crying right along with him.
After bidding our farewells and blessings, I continued my walk ending at the house a few minutes later. Like I always do, I parked the cross and prayed that through the mobile representation of the cross which God has blessed me with, I had touched someone's life today and I gave thanks to God for allowing this special cross to touch me.
"So all of us who have had that veil removed can see and reflect the glory of the Lord. And the Lord--who is the Spirit--makes us more and more like him as we are changed into his glorious image." ---2 Corinthians 3:18
Posted by Pastor Bobby